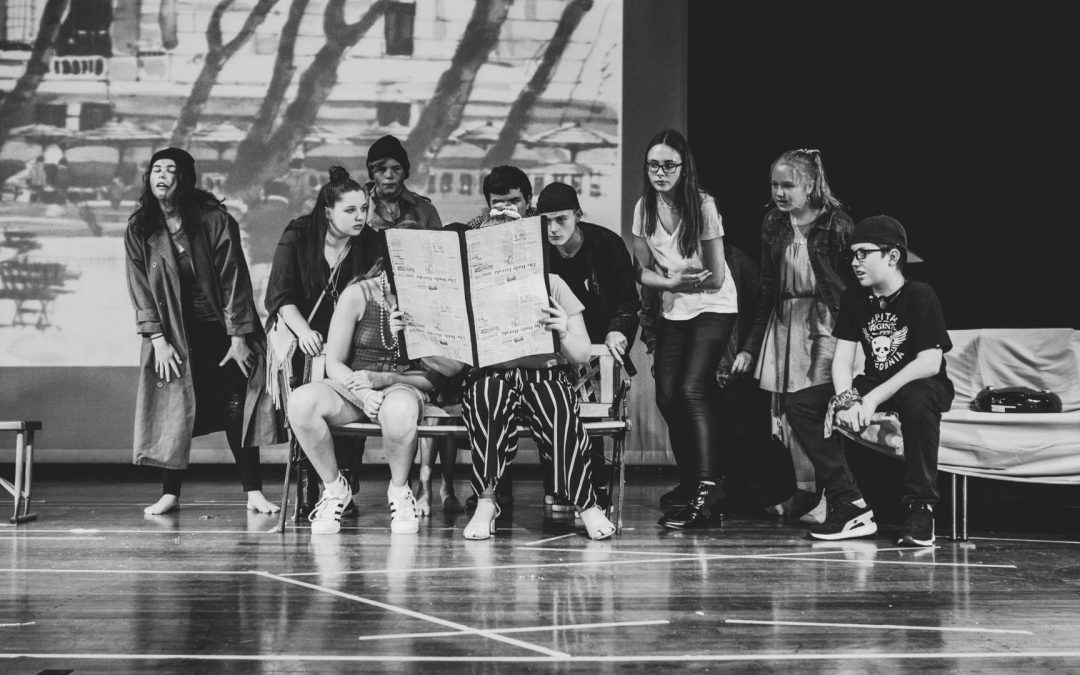 We’ve already had a look at some of the benefits that drama can have here: https://ogradydrama.com.au/what-can-drama-classes-do-for-your-child/ but how does developmental drama education differ from more traditional/current drama education?

To understand this a little better it’s worth looking briefly at where drama comes from.

The origins of drama go back a long way: predating written history with its roots in primitive society. Drama was used for lots of purposes when we lived in more primal and tribal societies. Teaching important skills and behaviour that were necessary to live and survive were often taught through role-playing. Oral repetition was often used to teach laws and social customs, while dramatic performance was used to enact mythical or historical episodes as a reminder of what was truly important and meaningful.

Drama was an integral and indispensable part of life in primitive society. It gave them skills to develop in order to survive while ritual brought about a sense of shared meaning and community.

Over time this transformed into theatre: essentially, primitive ritual brought to a stage with an audience. Originating in ancient Greece with such genres as Comedy and Tragedy we still tell the stories today of Achilles and the Trojan War.

From there we had the era of Shakespeare.  In the mainstream, theatre has essentially been replaced by blockbuster movies and now Netflix (though of course theatre is still popular, just not like it was in Shakespeare’s day!). And so drama now seems vastly different from where it originated. When we think of dramatic performance  we can’t help but think of actors and actresses and thus all that can come with that: fame, recognition and money. This is a relatively recent perception of drama, but it certainly impacts the way drama can be taught or engaged with.

Current drama education then can easily focus on performance rather than development. Education may become less interested in the well-being and welfare of the students – how they engage with and live satisfying and fulfilling lives – than they are with what it takes to get a good performance.

This is not to diminish performance, but rather to put it in perspective. For every ‘success’ story in Hollywood there are hundreds of people whose daily struggle to gain recognition actually diminishes rather than enriches their life.

This is where the O’Grady Drama SEL focus & developmental drama comes in.

Developmental drama is far more interested in people living full and satisfying lives than it is in making them famous. It’s about gaining skills that are not only a heck of a lot of fun to learn, but also enrich the lives of those who engage with the learning. It helps people to find a sense of meaning, while also developing skills to navigate our often complicated world.

It doesn’t negate that pursuing a career in acting can be a rich and rewarding path, but recognises that there is a bigger picture that can often be ignored in current drama education.

Let’s look at some key ideas that might help to clarify what is meant by development and how it applies to drama.

An age old debate. How much of who we are is because of innate qualities and how much is to do with our environment and the culture we grew up in/still live in? The question isn’t an either/or question. It’s less to do with which one is right and more to do with how these two factors interact with each other. Exploring this dynamic through role-play and re-enactment can help develop a strong sense of identity.

The Nature of Change

How much do we change and how much do we stay the same? Are you still the same person you were yesterday? How about the same as 10 years ago? We are in a constant state of change, and yet something about who we are seems to remain consistent. Learning to engage with the nature of change (particularly the ones we didn’t necessarily expect!) while also respecting that which doesn’t change, is a theme commonly explored through the use of drama. Drama here is not just a re-enactment of life but is actually an engagement with it.

Development is now commonly thought of in stages: you have to stand before you can walk, and walk before you can run. Jean Piaget, a key figure in developmental psychology, posited that children learn by hands on experience. Touching, sensing and exploring what does and doesn’t work. Learning new skills and knowledge comes with ‘failure’ after ‘failure’ (think of how many times a child falls before they learn to walk). Drama is a way of having hands on experience. Trying different things in a multitude of different ways to find what works for that particular individual.

In a sentence, developmental drama differs to ‘traditional’ drama because it is more focused on how to live a good life rather than how to give a good performance, and that can make a huge difference indeed.